Some of the highest densities of grassland birds make the Northern Great Plains (NGP) their home.

“You all are stewards of some of the best of the best,” Bob Ford, coordinator for the Partners in Flight program told a group of Winnett area ranchers during a recent Winnett ACES meeting. Ford was referring to habitat ranchers and private lands provide. Nearly 80 percent of intact rangeland in the NGP belongs to private landowners, who play a key role in conserving habitat for species.

In particular, stewards are conserving habitat for “the little four,” as Partners for Fish and Wildlife (PFW) biologist Marisa Sather calls four grassland songbirds — Chestnut Collared Longspur, McCown’s Longspur, Baird’s Sparrow and Sprague’s Pipit. These birds, whose ranges stretch from Mexico to Canada, rely on the Northern Great Plains for their spring, summer and fall habitat. Notably, populations for these birds have declined 75-to-90 percent since the North American Breeding Bird Survey began in the 1960s.

This alarming statistic comes with hope, however. At the core of their breeding distributions, in eastern Montana and southern Saskatchewan and Alberta, these particular bird populations have been buffered from the impacts of land use change by a high-quality, intact “grazing landscape” that multi-generational family livestock ranches manage. Within the “grazing landscape,” birds thrive alongside ranching communities. Outside this landscape, they are in big trouble.

Ranching plays a critical role in keeping grassland habitat healthy and intact for birds and other native species and preventing them from being used for less-compatible uses. Our native grasslands evolved with large herbivores, such as bison. Through managed grazing, cattle can mimic the historic role that bison played on the plains. Cattle must graze on the grass for the grasses to thrive. Grazing leaves a mosaic of grass heights, which benefits multiple grassland bird because different species prefer different heights of grass. Some, like McCown’s Longspur, prefer bare ground and short grass, while Baird’s Sparrow prefers short grass to tall grass, plus mixed grasses and shrubs in sagebrush country. Some songbirds are sensitive to shrub cover, but others like Brewer’s sparrow and sage thrasher require large amounts of sagebrush cover, which is plentiful in Petroleum County.

Ranchers are helping others understand grassland birds and their responses to habitat changes. Marisa Sather organizes a partnership of agencies, non-profit and landowners who monitor the effects of land management — including ranching — on the imperiled songbirds’ habitat. Starting in 2017, ranchers on the south side of the Missouri River participated  in a bird monitoring study already underway on the north side. The results confirm the benefit of the “grazing landscape” – that working ranches are key to maintaining the large, intact grasslands critical for these species’ survival.

For example, in central Montana, north of the Missouri River, the rancher-led groups help restore marginal cropland to native grassland and help landowners avoid their land from expiring as Conservation Reserve Program (CRP) grazing land. The CRP program provides a payment to landowners to keep the land out of crop production. Often, when this land expires from the program, landowners turn it back into cropland. Why does this matter?

Because the conversion of rangeland to cropland is considered the biggest threat to grassland birds, so RSA devised a program to help ranchers keep the land in rangeland — which benefits both the birds and ranch operations. Since the program’s inception in 2017, RSA has restored over 8,000 acres of cropland to native grassland and helped convert over 10,000 acres of expiring CRP parcels into managed grazing systems in their three-county area.

Following RSA’s lead, the rancher-led conservation collaborative, Winnett ACES, will start a similar program in 2019 that will fund projects such as water improvements and wildlife-friendly fencing. Also, the program will feed a growing movement to reseed cropland to rangeland in Petroleum and surrounding counties. Notably, in the past five years,Petroleum County landowners have restored over 12,000 acres of cropland to rangeland. 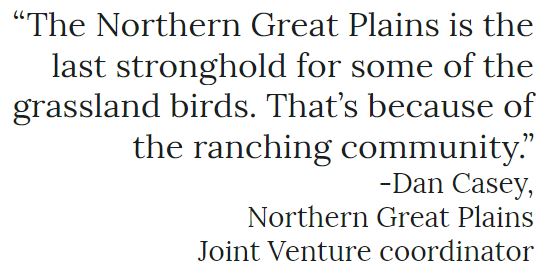 Furthermore, the World Wildlife Fund’s Sustainable Ranching Initiative mission is “driven by the goal of maintaining grasslands by ensuring that ranching stays viable and sustainable.” The Nature Conservancy Montana owns and operates the Matador Ranch as a grass bank in Phillips County. The grassbank model extends conservation efforts through lease arrangements. Ranchers lease grass at the Matador from TNC at a reduced fee in exchange for conservation practices on their own private land.

Such organizations see collaboration with landowners as essential to large-scale conservation that will make a difference in preserving at-risk bird populations, as well.

Laura Nowlin is a wife and mother of two, working, living, and playing on a little piece of paradise in central Montana, north of the town of Winnett. She and her husband ranch. She is also a part-time coordinator for the Musselshell Watershed Coalition. Between the two of them, they serve in seven community groups. Laura is a board member of the Winnett ACES (Agricultural Community Enhancement and Sustainability).

Montana Sugar Beets Are a Sweet Success for Growers