Montana Sugar Beets Are a Sweet Success for Growers

From the morning teaspoon in your coffee to the tasty dusting on top of cakes and cookies, Montana sugar beets make life sweet.

The unique root crop, which looks similar to a turnip, is processed to make all types of sugar, including granulated sugar, brown sugar, powdered sugar and more. There is no difference in sugar beets and sugarcane as far as the end product, but sugar beets require a cool climate, making Montana the perfect place for them.

“Our winters make Montana a good place for sugar beets,” third-generation grower Don Steinbeisser says. “Our cooler winters make for good storage, and in the summer, we’re warm and hot, and near a water source. That makes for a good crop.”

Steinbeisser grows approximately 850 acres of sugar beets in the eastern Montana city of Sidney, close to the confluence of the Yellowstone and Missouri rivers for irrigation. He’s been growing the crop for about 40 years, and says that for Montana, it’s an excellent cash crop, thanks to its ability to be stored. 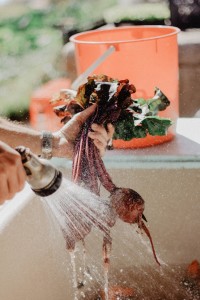 “We’re too far away from a lot of markets for crops like tomatoes, but sugar beets are a crop we can store because of our cold weather. It just works well for the state,” Steinbeisser says. “Sugar beets like it when it cools off at night and they start producing more sugar. That’s part of the process, and between Sidney and Billings, it employs a lot of people.”

In 2016, the state planted 45,600 acres of the crop and harvested 45,300 of those acres with a yield of 35 tons per acre. Planting typically starts in April and harvest begins in mid-September through October.

After the beets have been harvested, they are stored until ready for processing. Sidney Sugars in Sidney is one of Montana’s major sugar processing plants, producing about 260 million pounds of sugar and 120,000 tons of agriproducts each season. The plant sends product across the country and supports Montana’s local economy with jobs, monetary contributions and more.

“The factory employs local and uses local energy, and we contribute quite a bit to the economy in eastern Montana,” says David Garland, general manager at Sidney Sugars. “This year, we purchased just over a million tons of sugar beets and will make about 270 million pounds of sugar.”

He adds that they source about two-thirds of their beets from Montana growers, while the other third comes from North Dakota.

Converting sugar beets into sugar begins by slicing them thinly into cossettes, which resemble French fries or a Ruffles potato chip. The beets go through an extraction, purification and filtration process before going on to the final crystallization step. Beet pulp and molasses are left over as byproducts, and they’re used for animal feed that increases milk production in cows.

“We process the byproducts and sell the beet pulp as a pellet for animal feed and the molasses is sold to companies that make cattle feed,” Garland says.

Both Garland and Steinbeisser note that Montana sugar is used domestically and that the U.S. actually does not export any sugar at all.

“About 80 percent of our sugar is distributed in bulk rail to large customers like General Mills or Kellogg’s, while the remaining is sold in 2,000-pound super sacks,” Garland says. 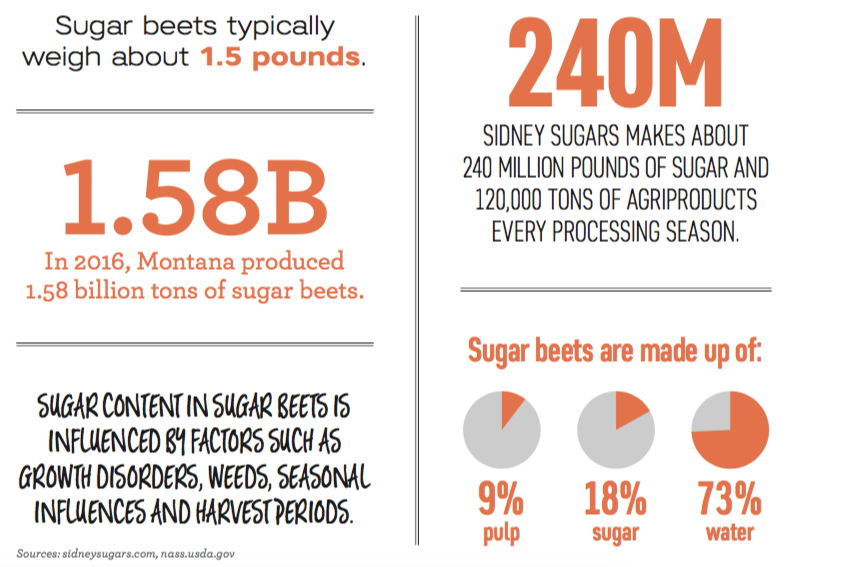 Where Cowboy is a Verb