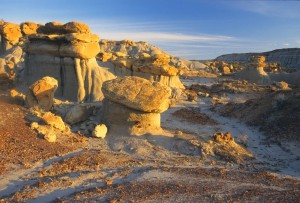 Badlands near Jordan: Formations such as these near Jordan are fairly common in the badlands of eastern Montana. (Photo by Rick and Susie Graetz)

French trappers working the Missouri and Yellowstone rivers and their tributaries well before Lewis and Clark made their epic journey, called the dry land formations they encountered “mauvais terres” (badlands). Painter Karl Bodmer, who accompanied German Prince Maximillian on the Missouri in 1833, was captivated by these unusual landforms and included them in his paintings.

Some stretches of badlands stand out amid grasslands, while others are mixed with river-breaks terrain, especially in the Upper Missouri River Breaks National Monument.

These mini-deserts begin forming once the vegetation cover has been destroyed, usually by wildfire or overgrazing. Water running off of the underlying clay surface and soft bedrock causes erosion. Gullies are formed, and seeds of potential new growth of plants and grasses are washed away or unable to take hold in the hardened soil.

Heavy spring and summer downpours accelerate the process. Steeper slopes are etched more quickly, and seemingly smooth-surfaced alluvial deposits fan out below them. Soon, the entire disrupted area is void of green growth. Once well into the creation stage, they perpetuate themselves and become permanent. In a few instances, vegetation again takes hold in the disturbed areas and the beginnings of badlands topography is reversed, but this is rare.

While this carved, dry-appearing country receives as much precipitation as adjacent areas, the lack of a protective shield of flora gives it an image of receiving very little moisture.

Exquisite sandstone formations (where sandstone exists) are often intermingled with a badlands environment. Miniature and giant toadstools, castles, cathedrals, fine-lined domes, balancing rocks, sentinel-like spires and other beautiful statues of rock add color and personality to these rain-furrowed hills, while gremlins and goblins stand watch atop high cliffs. Wind erosion helps fashions them, taking away one grain of sand at a time.

Badlands and sandstone sculpture displays are found throughout Montana east of the mountains. Makoshika State Park, on the south edge of Glendive, is perhaps the best-known accumulation of these austere places. Just to the west of Makoshika and across the Yellowstone River from the town of Terry, the Terry Badlands are another good example of this unique type of terrain. East of Jordan, lonesome Highway 200 slices through extensive parcels of “mauvais terres” that range north toward Fort Peck Lake.

The Powder River Country of southeast Montana, the Yellowstone River Breaks south of Sidney, many areas along the entire Hi-Line east of Browning to North Dakota, and the land between Scobey and Plentywood also display zones of these fascinating miniature deserts and wind-blasted stones.

The 300-mile stretch of the Missouri River from Fort Benton to Fort Peck is a showcase of sandstone creatures and badlands that also illustrates evidence of critters who passed through this geography 70 million years ago. Sections of McCone, Garfield and Phillips counties north and south of the Missouri were home to Tyrannosaurus Rex, Triceratops, Albertosaurus, Mosasaurus (a marine reptile) and other giant creatures. Due to erosion, some of the richest records of prehistoric life in the world have been, and continue to be, uncovered here. In 1902, one of the first T-Rex fossils ever found was discovered near Jordan in the Hell Creek badlands.

Badlands are intriguing to see anytime of the year and are best photographed as the first light of dawn illuminates the formations and again when the last rays of the sun turn these masses of earth and rock a rich gold and orange. Newly fallen snow gives them a totally different and beautiful look when framed against the deep blue of a cold winter sky. These natural masterpieces and the surrounding surfaces are fragile, so view and photograph them from the edge, leaving them untracked.

Column courtesy of This is Montana, published by the University of Montana.

Rick and Susie Graetz | University of Montana | Department of Geography

Drew McNally, center, along with her faculty advisor, Kirsten Matteson, right, and project...