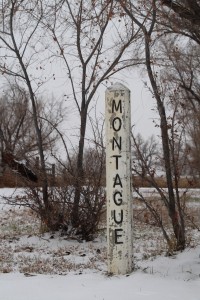 Special to the Terry Tribune from Yellowstone Newspapers

Have you ever wondered about the story behind a Terry street name?

It would be hard to find one that embodies a more colorful character than Montague Street.

Located on the northernmost outskirts of Terry, the east-west was named after John W. Montague, who is generally believed to be Terry’s first settler.  He was a scout for Lt. Colonel George Armstrong Custer as well as a buffalo hunter and later, a hunting guide for pioneer photographer Evelyn and Ewen Cameron.

A Montague diary would have been priceless today.

In 1877, a year after the Custer Massacre, he built a dugout about two miles south of present-day Terry, creating what was considered a wayside inn that offered food and lodging for parties of soldiers.  Many of the latter would have been involved in tracking the whereabouts of Sitting Bull after the Custer disaster.  Others would have been protecting supply wagon trains along the Yellowstone Trail, a major artery along the valley bottom.

Montague, a native of Pine Grove, Pa., supplemented his income by selling prairie hay to the freighters who operated between Bismark, N.D. and Miles City, the site of Fort Keogh.

Montague was likely a business competitor of the Joubert family. Terry was originally known as Joubert’s Landing, after a pioneer family that operated a supply stop.  In the 1938 Billings Gazette obituary of Stephen Edward Joubert, he was referred to as one of the three earliest pioneer residents of Prairie County.  Born on June 10, 1875 in Rantoul, Wisconsin, Joubert’s obit went on to say he came to Terry with his family in 1882 with his parents and their other children.  The obit didn’t name the other pioneer residents, but Montague was undoubtedly one of them. Joubert’s father may have arrived earlier to establish a business before moving his family out.

Montague’s buffalo -hunting days ended, for the most part, with the near-eradication of the prairie beasts for their hides.

In the book, “Evelyn Cameron: Photographer for the Western Prairie,” author Lorna Milne wrote that Montague, affectionately known as “Monty,” served as their hunting guide on the first and many hunting expeditions in eastern Montana.

In 1893, Montague appears in the Billings Gazette as a justice of peace for Terry township.

A month earlier, Evelyn Cameron had sent him one of the Christmas cards she gave away to friends.

Under the heading “letters sent,” in the last entry in her 1907 diary she wrote: “Montagu, John.  Photo of Montagu Butte where after a fight he outwitted the Indians.”  She had discovered the butte in the Pine Hills near Miles City.

“Not only did she photograph the butte Monty fought Indians from, she apparently named it after him,” wrote Milne.

The Terry Tribune’s obituary described him as “the last of the old-timers or the organizer of the village of Terry and Terry Township.”

Eastern Montana is where?